The European's Trading Posts In Bengal 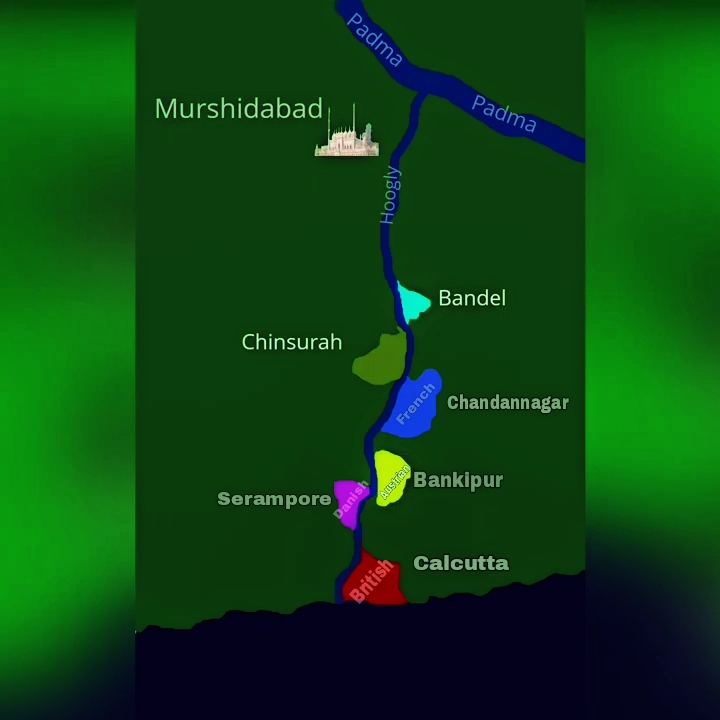 The discovery of mineral resources, increase of the volume of sea-borne trade, technical and commercial blooming in many countries in Europe resulted in an invigorated economy. As a result, an epoch-making commercial revolution began in Europe in the fourteenth century. Thus, their internal economic system started to become stronger. The quest for raw materials and market for produced goods became important too.

In 1498, Portuguese explorer Vasco da Gama landed in the South Indian port of Calicut. He made Indian subcontinent into the center of the world's trade expansion competition and Admiral Albuquerque occupied the Indian Ocean. In short, he took control of all of Indian’s external trade tax.

In 1648, the Westphalia Treaty among many European Countries ended the thirty year’s war. After peace was established, many European Countries set sail to pursue trade with a new found zeal. Most of their goal was the Indian subcontinent. Silks, fine cloths and spices of Bengal were renowned among products produced in India. That was why Bengal became the main attraction for them. Thereupon, Bengal saw a flourish in the business sector after a very long time.

Europeans established their trading post and factories in many parts of Bengal. Most of these were built along the bank of the Hooghly river. So, trade-wise and because of the Europeans location, the Hooghly river became very important. Basically, keeping that in mind, Murshid Quli moved his tax office to Murshidabad, as Murshidabad was situated by the bank of the Hooghly river, it was easy to keep an eye on the Europeans from there. Chittagong and Bandel were among the first Portuguese trading posts in Bengal. The unruly Portuguese operated piracy all across the coastal area in the name of trading. In 1666, the Arakanese occupied Chittagong. The Portuguese allied with them. Shaista Khan was Bengal’s subahdar at that time. He sent an army to retake control of Chittagong and ultimately defeated the Arakanese. Thus, Chittagong was brought back under the Mughal Empire and the Portuguese were driven away from Chittagong. After that, they conducted their trading activities from Dhaka and Bandel. Rajshahi, Dhaka and Chinsura in Kasimbazar (on the bank of Hooghly river) were the major trading posts of the Dutch. Securing the Mughal’s permission, they built Fort Gustavus at Chinsurah. 40% of their import came from Bengal, among which silk and Muslin were predominant. The French attained Permission from Shaista Khan to lead trading activities in Bengal in 1692. Their main trading post was located in Chandannagar, by the bank of the Hooghly river. They built fort d’Orleans there. They also had a strong hold over Dhaka. The Austrians also formed a company named the Ostend Company and set up their trading post at Bankipur. The Danish East India Company set up their trading post at Piply first. Later, Srirampur became their leading trading post. Besides, the Andaman and Nicobar Islands were also under Danish control. However, the English were the foremost colonial power after the Portuguese. They first set foot in Bengal around 1600. Later in 1651, they secured permission from Bengal’s governor Shah Suja to expand their trading activities. In 1696, Azim-Us-Shan granted them permission to build Fort William in Kolkata.